Skydiving from a Reentering Spaceship

Felix Baumgartner’s supersonic skydive from a balloon 24 miles above the Earth on October 15 justifiably made headlines around the world. During the 4 minute 20 second freefall he broke the sound barrier—by a big margin—reportedly reaching a top speed of 833 mph or Mach 1.24 (meaning that his speed was 1.24 times the speed of sound).

Felix started his jump with zero initial speed when he stepped off his balloon platform, and was then accelerated by gravity. Imagine instead jumping out of a spaceship that was hurtling through the atmosphere at hundreds of miles per hour, and then parachuting back to Earth.

And having to keep the whole thing secret so no one knew about it.

That’s exactly how the first person to orbit the Earth, Soviet cosmonaut Yuri Gagarin, returned to Earth from that first flight on April 12, 1961. Gagarin’s Vostok capsule used a parachute to land on the ground, but its Soviet designers were not convinced they could bring the capsule down gently enough for the cosmonaut to survive. They were probably right. An eyewitness who happened to see Vostok land is reported to have said, “It fell, then it bounced and then it fell again. There was a huge hole where it hit the first time.”

Fig.1: The Vostok 1 capsule after returning. The white parachute is visible behind it. (Source: http://www.tecca.com/news/2011/04/12/vostok-1-gagarin-photos/)

Fig. 2: The Vostok 1 capsule, with the rut it dug while coming to a stop. (Source: http://2.bp.blogspot.com/-k4q8FJtpT_I/Tai2mS30EwI/AAAAAAAALuc/eNqNi5dFkxM/s1600/vostok+landing.jpg)

Instead the designers arranged for Gagarin to eject from the reentering capsule at an altitude of 7 km (4.4 miles or 23,000 ft) above the Earth and parachute down to the ground. But, concerned that this flight would not be recognized as a complete flight if the cosmonaut did not land in the capsule, the Soviets kept this fact secret for a decade. This was because the Soviets submitted the flight to the Fédération Aéronautique Internationale (FAI) to lay claim to the first successful orbital flight. FAI, which was founded in 1905 and is the official body overseeing world records related to the air and space, required the pilot to land with the craft.

Gagarin was not the only person to do this. All the cosmonauts of the first six Soviet orbital flights returned this way. This included Valentina Tereshkova, pilot of Vostok 6 and the first woman in space. She was not in the military—she worked in a textile factory—making her the first civilian in space. She was chosen as a cosmonaut because she was a member of a local parachuting club.

How Fast Were the Vostok Cosmonauts Going?

I’ve wondered this for a long time, and Felix’s jump motivated me to go back and do the calculation. So here it is, with some details at the end of the post. 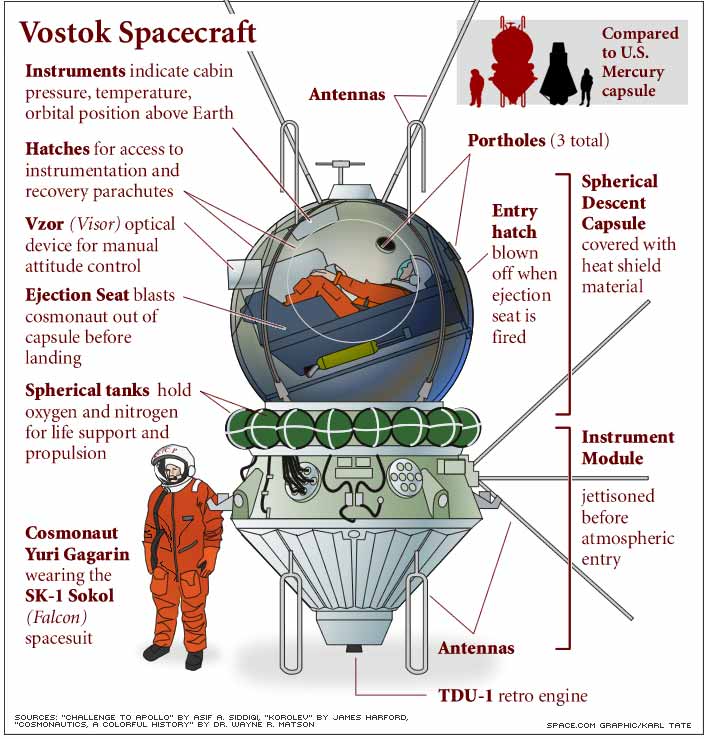 Fig.3: A schematic of the Vostok 1 spacecraft showing the spherical return capsule with the instrument module below it. (Source: http://2.bp.blogspot.com/-5x3CBKVhsck/TaR469o5ZsI/AAAAAAAAAyU/dVvzFP6fbAE/s1600/vostok_diagram_020.jpg)

Fig. 4: A photo of the Vostok 1 spacecraft. (Source: http://www.astronautix.com/graphics/v/vostok.jpg)

The spherical return capsule was coated with ablative heat shielding to protect the cosmonaut from the tremendous heat generated when the capsule slowed down in the atmosphere. The capsule’s center of gravity was designed to be off-center, which oriented it and kept it from rotating when the atmospheric drag from reentry became large enough.

When the capsule reached an altitude of 7 km, a hatch blew off and two seconds later the cosmonaut was shot out of the capsule attached to his seat.

Fig. 5: A cosmonaut in the Vostok seat after being ejected. (Source: http://blogs.scientificamerican.com/guest-blog/files/2012/01/Dummy-in-Vostok-seat-Associated-Press.jpg)

My estimates show that when Gagarin and the other cosmonauts ejected from the capsule, they were traveling at 500 mph (225 m/s), or Mach 0.72.  (The capsule passed through Mach 1 at about 14 km altitude.)

So this was slower than Felix’s maximum speed, but quite a ride nonetheless. Tereshkova probably still holds the record for the fastest woman in free fall through the atmosphere.

Shortly after ejecting, a parachute attached to the seat opened to slow the descent. At 4 km (2.5 miles) altitude, the cosmonaut ejected from the seat and opened his/her own parachute. At this point s/he was probably traveling about 150 mph (70 m/s). The cosmonauts reportedly landed about 10 minutes after ejecting from the capsule.

In retrospect, it seems somewhat amazing that all the Vostok cosmonauts survived their missions—even leaving aside the potential problems on reentry. For example, at the time of Gagarin’s launch, the success rate of the launcher was reportedly 50%, and the success rate of the retrorockets needed for reentry was reportedly 60%. So just based on these two systems, the probability of success of the mission was just 30%.

Some details about my calculations:

To determine Gagarin’s speed when he ejected, I calculated the trajectory of the Vostok capsule as it left orbit and reentered the atmosphere using a computer program I wrote to model ballistic missile trajectories.

The Vostok 1 spacecraft was in an orbit with a perigee of 169 km and an apogee of 327 km, so its speed ranged between 7.9 km/s at perigee and 7.7 km/s at apogee (more than 17,000 mph). To leave orbit, a retrorocket slowed the capsule so that it began to fall to Earth, and the instrument module then separated from the spherical return capsule. As it descended, atmospheric drag slowed the capsule.

At very high altitude, where the mean free path of air molecules is large compared to the diameter of the capsule, molecules hit the capsule one at time and the drag coefficient Cd has a value of 2. For the 2.3 meter diameter Vostok capsule, this region is at altitudes higher than about 130 km.

At lower altitudes, experiments show that the drag coefficient of a sphere is about 0.92 in the supersonic region, and drops to about 0.47 at subsonic speeds (but still at high Reynolds number).

Fig. 6: Measurements of the drag coefficient (CD) for a sphere (upper curve) as a function of speed (Mach number, M∞), for high values of Reynolds number. (Source: http://homepages.wmich.edu/~y3yang/files/handouts/chap14082.pdf)

Using the fact that the capsule had a diameter of 2.3 m and a mass of roughly M = 2,500 kg, you can calculate the ballistic coefficient, β = Mg/(Cd A), which is the parameter that enters the equations of motion, where A is the cross sectional area of the sphere, and g is the acceleration of gravity.